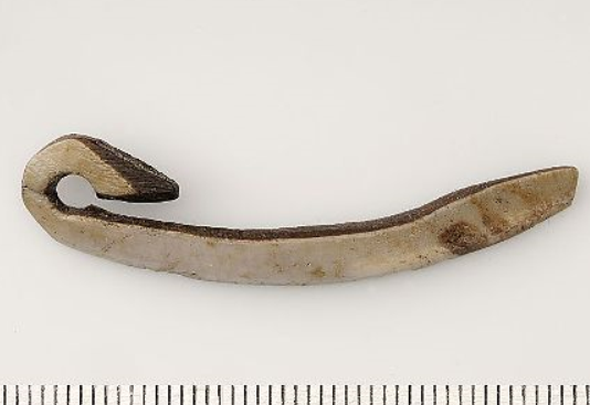 The picture shows an exquisitely preserved and previously unpublished object from the 1976-1980 excavations at the Alvastra pile dwelling. It was found in Mats Malmer’s eastern trench. Like several other fishing hooks from the older excavations, it is made of boar tusk. In his writings on the pile dwelling Mats Malmer maintains on several occasions (for example in Malmer 2002) that these hooks are not strong enough to be of functional use. When I talked about these fishing devices at the international open workshop entitled Socio-environmental Dynamics over the last 12000 years organised by the Graduate School of Human Development in Landscapes at Kiel University last spring,  I got the distinct impression that this was not a view endorsed by the archaeologists gathered at the session on fishing communities and technologies. Indeed, Hans Browall’s idea is that these hooks were used for catching small freshwater fish (Browall 2011, p. 324). The fish remains recovered from the excavations were studied by Ebba During (1986). They consist mainly of freshwater species even if some of them (for example pike) also live in the brackish water of the Baltic. Those who used the pile dwelling had access to fishing in the waters of Lake Vättern, Lake Tåkern and a large number of small streams in their vicinity. During the Middle Neolithic the pile dwelling was about 70 km away from the shores of the Baltic. Thus finds of 20 scales of herring in the 1911 excavations provoked interest, Bo Gräslund writing an article about them (Gräslund 1978). The scales were analysed by a Norwegian specialist, Einar Lea,  and his results are discussed  by Gräslund.  In his latest book on the pile dwelling Hans Browall suggests that these scales may not be prehistoric at all as they come from herring that are much larger than the average Baltic herring of today (Browall 2011, p. 336). The scales also show that the herring from which they came grew as fast as modern herring in the North Sea and the North Atlantic.  Unfortunately the scales cannot be found in the storerooms of the museum so no new analyses can be conducted.

During, E., 1986. The fauna of Alvastra. An osteological analysis of animal bones from a Neolithic pile dwelling. Ossa, vol. 12, supplement 1. International journal of skeletal research. Stockholm.

Malmer, M., 2002. The Neolithic of South Sweden. TRB,GRK, and STR. The Royal Swedish Academy of Letters History and Antiquities. Stockholm.